When Henry Became A Beer Salesman at Cargo Brewery

In this Altitude piece we are back on the craft beers here at Waitiri Creek Winery we have gravitated to this beautiful Bedford truck  Henry struggled with our last beer feature. So just for kicks I’ve given him more of a challenge and made Henry the Cargo Brewery sales rep.

This doesn’t make any sense – I don’t know why I’m trying to sell beer back to the guy that gave it to me?!

Ok – the IPA, usually a bit hoppy and fruity.  Great for the kids. (Malcolm shaking his head no) For an IPA, it’s not even spicy

Why is it called an IPA?

Cause of its Indian origins.  the Indians used to sail the trade winds south west (laughing…) is that right?  Are they Indian hops

No they’re not Indian hops, they’re from up in Nelson.

Hmmmm – Pilsner – so much character it could be your only friend Malcom. fruity, rhubarb, rooty  – this is the yoga of the beers as far as being connected and grounded is concerned.  Kinda feels like a twister just touching down, making contact.

Did you read the script?

Yeah I did actually!

How did you make it brown?

Yeah you can feel it

…..and its also homogenised

So is that milk froth on the top.

So we started with the IPA, ah, Henry described,…..I think he described the flavour kind of correct, but um, his big mistake was saying that it’s called an India Pale Ale because the hops were from India when they’re, they’re not from India they’re from the top of the south island here in NZ.  Ah he also said you should give the kids, which you definitely should not give any beer to kids.

I don’t know what to say about Henrys description about the Pilsner – it left me completely speechless.  Um, I think he said there was rhubarb in the beer and yeah, Ive never tasted rhubarb.

Yeah the Porter that was an interesting one.  Henry confused me a little bit by saying that its brown because you overcook the beans,.  Ah you don’t actually use beans when you’re brewing beer.  First time I’ve ever heard anyone say that to me.  Um, but he got the butterscotch flavour right, he got the coffee flavour right, there’s a lot of froth on top.  Henry doesn’t seem to have a clue what he’s talking about with beer – he can definitely drink it well enough. He’s sculling those tasting glasses pretty well, but yeah I think when it comes to describing it, and selling it and tasting it – he’s got a bit to learn but his arse is in the right place.

Don’t worry you’ll have a more accurate tasting at Cargo Brewery as part of the Twilight Tours with Altitude. Cheers Altitude. 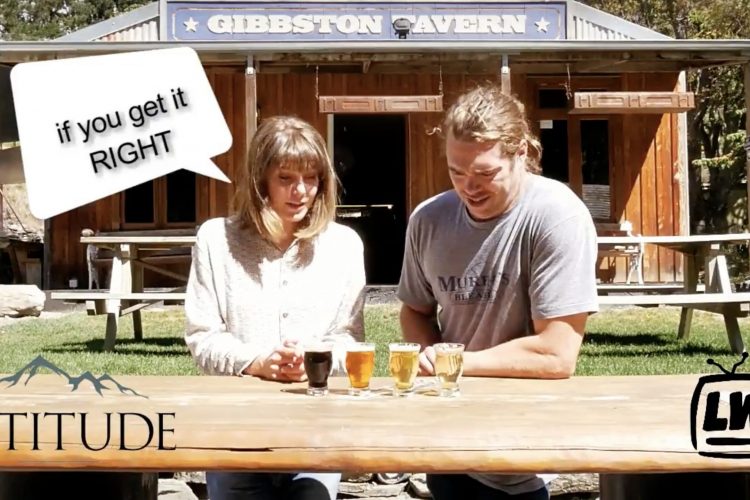